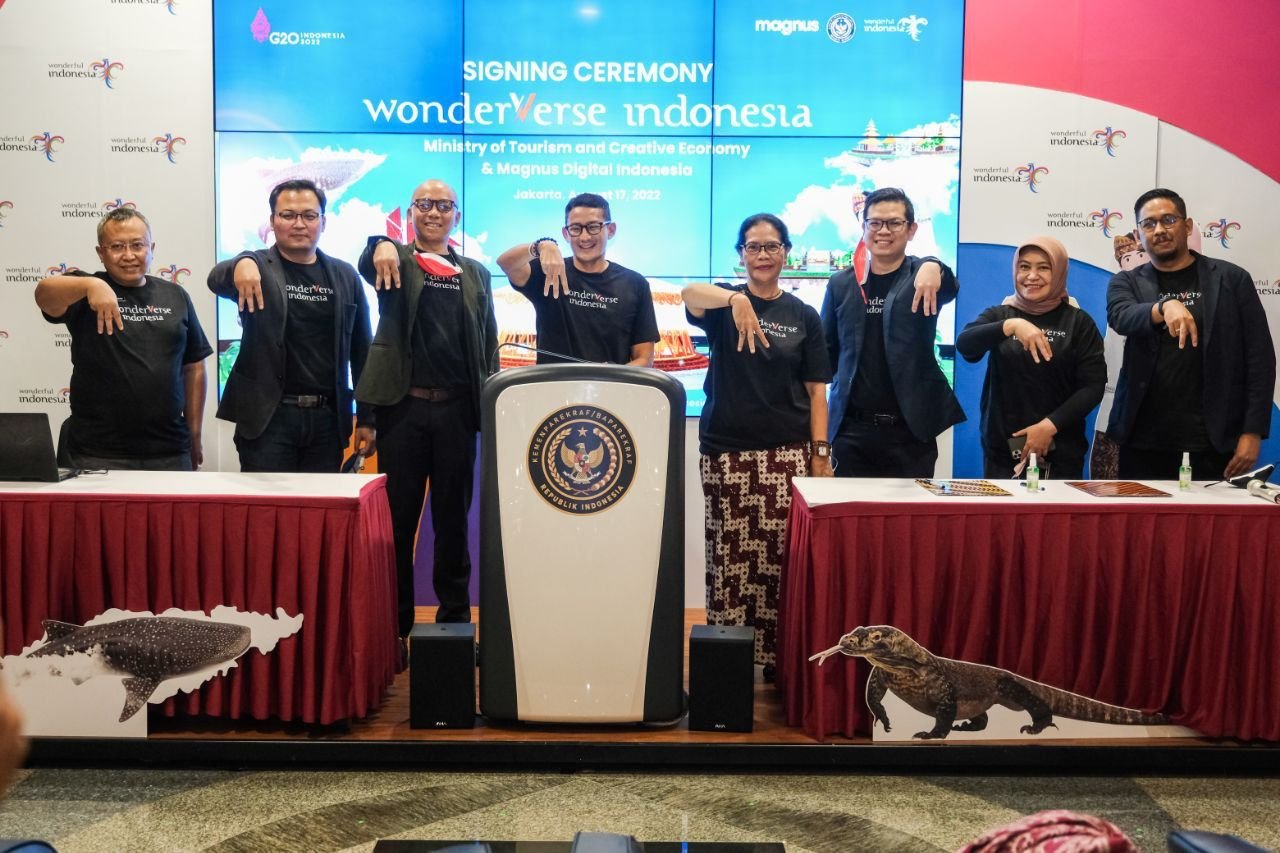 AsiaOne and PRNewswire are reporting on something called WonderVerse Indonesia, a Metaverse technology channel that allows the promotion of Indonesia’s tourism and creative economy in an interactive and digital way.

Launched by Indonesia’s Ministry of Tourism and Creative Economy and Magnus Digital Indonesia, an ad-tech marketing consultant and part of the Volare Advertising Network, WonderVerse Indonesia is an attempt to promote the beauty and uniqueness of Indonesia to the rest of the world through digital technology.

As the administering ministry, The Ministry of Tourism and Creative Economy has the vision to be at the forefront of advancing the country’s tourism potential and creative economy. One of them is by implementing the 3G strategy: Gercep (Move Fast), Geber (Work Together), and Gaspol (Work on All Potential Business Fields). These were initiated by the Minister of Tourism and Creative Economy, Sandiaga Uno say AsiaOne.

Magnus Digital Indonesia is a technology-based advertising and marketing agency bureau that has collaborated with various private clients and government agencies. Its role is none other than the developer, marketer, and person in charge of this new platform.

Apart from promoting Indonesian tourism to national and international levels, the purpose of this project is also to encourage the creative economy industry, especially tourism and creative economy players to be able to promote their products digitally on WonderVerse Indonesia.

“We are currently in a transitioning period where digitalization becomes the driving force behind transformation and new platforms that will boost tourism promotion. We are finding ways to accelerate technology development as Metaverse is a place where we can conduct activities interactively. This is considered a breakthrough that was accelerated and can be experienced because of the pandemic,” said Sandiaga.

WonderVerse Indonesia can be accessed anywhere through the desktop site, and for future development, it can be extended to VR (Virtual Reality).

This has increasingly opened opportunities for the tourism industry and the creative economy to reach the younger generation whenever and wherever they are. However, to be able to get the best user experience, there are minimum specifications that must be met or an internet connection with a minimum speed of 25 Mbps.

WonderVerse Indonesia is divided into four parts called “lands” which is a representation of Indonesia as an archipelagic country. The various “lands” include:

Visitors can interact with endemic animals, and enjoy digital galleries from Indonesian artists and a wide screen showcasing a variety of upcoming events and areas of interest.

All Indonesian digital traditional games and entertainment ranging from wayang shows, and traditional dances, to live streaming concerts, as well as music and films made by locals.

Visitors can shop various local goods and merchandise marketed by the tourism and creative economy merchants.

Visitors can directly purchase flight tickets, hotels, and accommodation in the top five destinations they want to go to for their holiday.

In the future, there is a possibility to add more “lands” to make this platform more interactive and interesting.

“As the digital world and technology are developing in Indonesia, we hope that the WonderVerse Indonesia developed by Magnus Digital Indonesia can become a forum for the Ministry of Tourism and Creative Economy to introduce the beauty of Indonesian culture to the world. Furthermore, WonderVerse Indonesia can become a means of information and provide great benefits for Indonesia in terms of digital, travel, and the creative economy,” said Hendra Liman, Chief Executive Officer of Magnus Digital Indonesia.

With the presence of WonderVerse Indonesia, the world of tourism and the creative economy hopes to bounce back after being affected by the pandemic for two years. In addition, this project opens a lot of opportunities by creating new jobs in the tourism and creative economy sectors, particularly in promoting products and participating in building the Indonesian economy.

The collaboration between the Ministry and Magnus Digital Indonesia is the first step to supporting and advancing the world of tourism in Indonesia, especially the tourism and creative economy actors as important pillars of the Indonesian economy going forward.