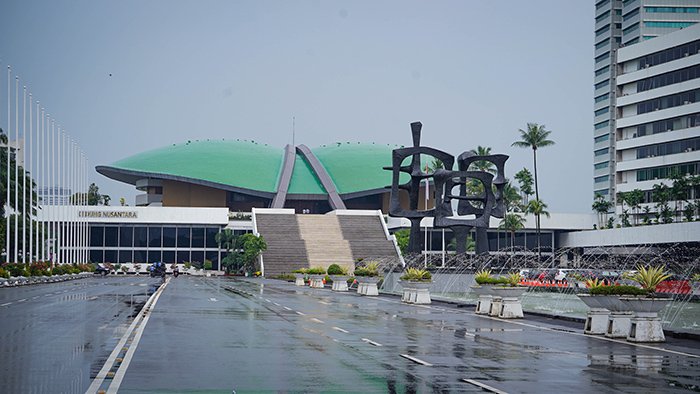 Regional and local newswires, including Antara News are reporting on the controversial Criminal Code Bill, which, according to reporting has been passed by the House of Representatives (DPR RI) during the parliament’s plenary session on Tuesday.

“Could the Bill on Criminal Code be passed as law?” DPR RI Deputy Speaker Sufmi Dasco Ahmad asked the members of parliament during the plenary session at the Parliament Complex here.

Ahmad said that all party fractions have concurred to table the Criminal Code Bill to the plenary session for approval during its first reading, report Antara News.

During the plenary session, a legislator from the Prosperous Justice Party (PKS) fraction, Iskan Qolba Lubis, interrupted the meeting by requesting an opportunity to deliver his statement, yet Ahmad decided to halt the interruption.

He clarified that the decision to stop the interruption was taken since the legislator had requested to withdraw some articles from the draft despite his party fraction having concurred with advancing the Criminal Code Bill to the second reading, say Antara News.

“There is a fraction asking to deliver their statement on the draft Criminal Code, and I have given the opportunity for them to speak, but when they instead asked to withdraw some articles from the draft, they have been inconsistent,” the deputy speaker pointed out.

Meanwhile, DPR RI Commission III Chair Bambang Wuryanto emphasized that the Criminal Code Bill should be passed to set a breakthrough in reforming the national criminal code to be consistent with the national development goals.

He said that the new Criminal Code would realize justice in Indonesia’s criminal law instead of merely prioritizing deterrent and retributive punishments.

The Criminal Code has been perfected through holistic means by accommodating inputs from all members of society to prevent the recurrence of criminalization and abuse perpetrated by law enforcers, explained Wuryanto.

TIME are reporting that authorities have pushed for more than half a century to modify the country’s existing penal code, which Indonesia inherited from its former Dutch administration when it gained independence in 1949. But the revised code, which could take up to three years before it’s fully adopted, introduces several controversial statutes that many observers believe will threaten human rights and civil liberties in the third-largest democracy and largest Muslim-majority nation in the world.

A copy of the legislation seen by TIME includes amendments that penalize insulting the country’s president and vice president, spreading fake news, having sex outside marriage, and committing religious blasphemy. The rules will apply to locals and foreigners alike. Many legal experts and activists decry that the changes signal a democratic backslide.

Indonesia’s parliament had planned on ratifying a new code in 2019, but some of the most controversial proposals sparked nationwide protests, and President Joko Widodo urged lawmakers to delay the process to consider public feedback.

Demonstrators gathered outside the Indonesian parliament buildings in Jakarta on Monday to protest the criminal code’s passage.

According to Bloomberg, Indonesia’s Minister of Law and Human Rights, Yasonna H. Laoly, told parliament that the president is expected to sign off on the new penal code. But even after that happens, it won’t take effect right away, as the government must draft implementing regulations. Civic organizations, meanwhile, plan to take their fight against the code to Indonesia’s constitutional court.

What does the revised criminal code include?

Indonesia has long attempted to pursue a penal code in line with its national values. But the changes effectively criminalize acts that don’t align with conservative and religious morality, like extramarital sex and cohabitation.

In the amended code, sex with someone who is not your spouse is punishable by up to a year in prison, while living together with someone who is not your spouse can lead to a six-month jail term. The code maintains that violators will only be prosecuted if their spouses; or in the case of unmarried individuals, their parents or children, lodge the complaints. Deputy Justice Minister Edward Omar Sharif Hiariej told CNN Indonesia that law enforcers will not carry out raids on matters of sex, report TIME.

The revised code empowers local governments to enact their own legislation. Tunggal tells TIME the code recognizes “living laws;” customary laws at the local level that may include sharia law, which can discriminate against and prosecute marginalized groups like women, children, and LGBT people. The Indonesian province of Aceh, for example, which operates under sharia, bans unmarried men and women from dining together.

But morality policing is just one of the many issues of the revised code’s 624-articles.

Critics say certain amendments also threaten democratic values, including freedom of speech. For instance, attacking the dignity of the sitting president or vice president will be punishable by up to four years in prison if either files a complaint; insulting the government is punishable by up to three years; and spreading disinformation that causes public unrest is punishable by up to six years. Protests and demonstrations in public spaces will require a permit, and violators may either be fined or imprisoned for up to six months.

Spreading communist, Marxist, or Leninist ideologies, or philosophies deviating from the national ideology of Pancasila; five largely secular guidelines for Indonesian life introduced by the country’s first president, will be punishable by up to 10-years in prison. And the country’s rules on blasphemy will be expanded to include apostasy (persuading a believer of one of Indonesia’s six recognized religions; Islam, Protestantism, Catholicism, Hinduism, Buddhism, and Confucianism, to become a nonbeliever), punishable by up to four years in prison.

TIME say that the revised penal code also threatens Indonesia’s international reputation. “Criminalizing the personal decisions of individuals would loom large within the decision matrix of many companies determining whether to invest in Indonesia,” U.S. Ambassador to Indonesia Sung Kim said in a speech in Jakarta on Tuesday, according to Bloomberg. “The outcome could well result in less foreign investment, tourism, and travel.”

The government, in deliberating the new code’s passage, claims it tried to accommodate a range of perspectives. The Ministry of Law and Human Rights held “socialization” activities with the public over the past two years to facilitate dialogue over the amendments. However, some opposition groups said the discussions were one-sided.