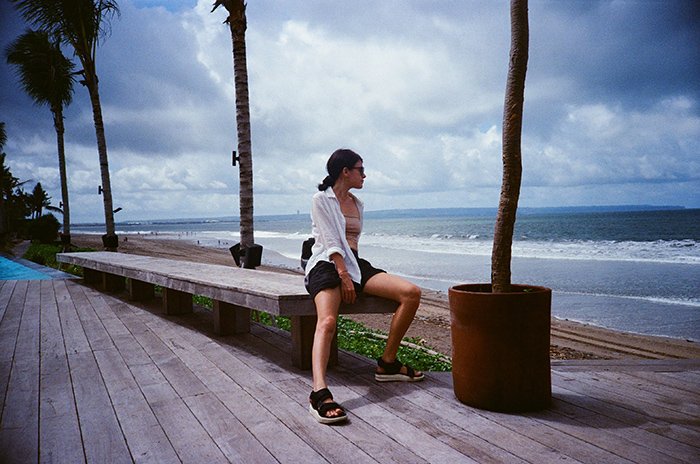 Ashleigh Kane, writing for AnOther Mag is reporting on efforts made by Potato Head Bali to deal with Bali’s trash. In her writing she says that Ronald Akili, Jakarta-born entrepreneur and founder of Potato Head Bali, was surfing locally with his son when they paddled into debris in 2016, which inspired him to make a difference, which he did and continues to do.

Located in bustling Seminyak, Potato Head opened in 2010 as a beach club (now resort) with a straightforward mission: to have a good time. When Akili pledged his zero waste commitment in 2016, Potato Head was sending 50-percent of its waste to landfills. The plan changed to “good times do good”: to “evolve from the norm of ‘destructive hospitality’ and transform into a new force of regenerative hospitality,” writes Kane.

Six years on, Potato Head’s waste-to-landfill number is five percent. In 2017, with assistance from the UN, Potato Head offset its carbon emissions and became the first hospitality company in the region to go carbon neutral. “We’ve been called idealists,” concluded Akili. “But we are trying to show that it’s not the goal that matters but the commitment to take the first step.”

Single-use plastic is banned; suppliers deliver food wrapped in banana leaves; and thirsty guests receive a complimentary zero-waste kit, including an aluminium and bamboo drinking bottle and a tote bag made from recycled plastic.

“The average tourist leaves about five kilograms of waste per day,” says Potato Head’s chief experience officer Simon Pestridge. “Times that by millions of tourists each year, about ten days each, and (the waste) is absolutely crazy.”

Kane writes that the team separates waste into organic and inorganic in-house, sending it either to its farmland as compost, to local farms as animal feed or fertiliser, or to power a local biofuel school bus. The most interesting, however, is what ends up at Sweet Potato Lab. A research and development team dedicated to innovating circular solutions by repurposing waste, Sweet Potato Lab transforms bottle caps, oyster shells, ijuk (the fibres of a native plant), old towels, and Styrofoam, into glassware, plates, hotel amenities, lampshades, and chairs. Akili calls it “beautiful sustainability.”

The diamond in Potato Head’s crown is the completion (and official opening) of the Potato Head Desa – ‘desa’ meaning village. It’s Akili’s vision of a holistic space experienced by locals as much as it is Potato Head’s guests – unlike most luxury resorts where privacy and separation from the outside world are paramount.

Designed by OMA, 168-luxury rooms known as the Potato Head Studios are amongst a new plant-based restaurant called Tanaman, bars, a wellness centre and spa, a gym, a library filled with art and design books that can be hard to get in Indonesia, a co-working space, a kids club, and a beachfront pool with daybeds. Soon, a rooftop art park will expand the art installations already found across the Desa, such as “5,000 Lost Soles” by German art-activist Liina Klauss, constructed with 5,000-flip-flops collected from Bali’s coast.

Guests enter the Desa as an open-air plaza with unobscured views of the beach. The main building is elevated, almost out of sight. It’s important that guests hardly realise they’re in a resort, explains Potato Head’s head of architecture, design and development Ade Herkarisma. “Usually, there’s a lot of privacy (in resorts), so this allows a different dynamic to interact.”

True to its word, the materials employed range from recycled foam off-cuts from mattresses, reclaimed timber, industrial rubber rejects, plastic bottles and caps. The centrepiece is the roof made from 1.5-tonnes of plastic, woven to look like rattan.

Kane says that for Akili, the Desa is just another step towards a more sustainable, equitable future of hospitality and tourism. “We think there’s a shift from sustainable tourism to regenerative tourism,” says Pestridge. “If you think about the definition of sustainability, it’s something we can do in perpetuity. (But) we think you should be regenerating communities and environments. If you come to Bali on vacation: what did you leave behind that made it better than when you found it?”

With an estimated 1,000-people coming through Potato Head every day, Akili believes that in the last six years, his team and its practices have inspired more than two million people to the possibilities of a beautiful, sustainable lifestyle. “Ronald (Akili) says it’s small things repeated thousands of times, rather than one big thing, that’s going to change the world,” says Pestridge. “And that’s how we’ll keep thinking about it.” It’s a quiet movement, but one that speaks volumes; now, here’s to hoping the rest of the world can hear it.