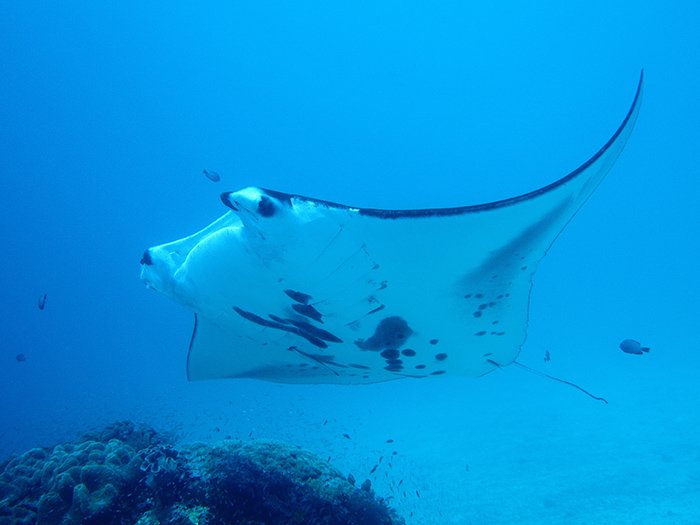 A recent report published by Mongabay says that ocean-dwelling sharks and rays, including the majestic reef manta ray (Mobula alfredi), have declined globally by an estimated 71-percent since 1970 due to fishing. But a new study of reef manta rays in eastern Indonesia’s Raja Ampat archipelago, combined with an exciting discovery from Komodo National Park further west earlier this year, suggests reef mantas are following a different (and more encouraging) trajectory in the Southeast Asian country’s waters.

In May 2022, researchers announced they had identified an aggregation of nearly 1,100-reef manta rays in Komodo National Park, likely catapulting the park’s waters into the list of top locations for mantas in the world. A new study led by University of Auckland doctoral candidate Edy Setyawan, heralds more good news for Indonesia’s manta rays and highlights how the country’s conservation efforts have established a safe haven for reef and giant manta rays (Mobula birostris) in the Raja Ampat Islands.

Ray conservation efforts in Raja Ampat began in earnest in 2007, when the local government and other stakeholders began to implement a series of marine protected areas (MPAs) across the islands. In 2012, the area was announced as Southeast Asia’s first shark and ray sanctuary. Two years later, the Indonesian government declared the reef and giant manta rays nationally protected species, say Mongabay.

Anecdotal reports indicated these conservation efforts had shielded Raja Ampat’s reef mantas from fishing. Edy and his colleagues assessed the accuracy of those reports by quantifying reef manta population trends in the Dampier Strait and South East Misool, the two Raja Ampat MPAs where they had the most ray survey data. They identified individual rays in photographs and put the data into a mathematical population model that accounted for repeat visits from the same manta rays and the transitory nature of this highly migratory species. With this model, they estimated the number of resident reef mantas and annual population growth rates in each MPA between 2009 and 2019.

Edy’s team identified 1,041-individual reef manta rays from the photographs from Dampier Strait and South East Misool. They determined the resident population in Dampier Strait had increased from 226-rays in 2009 to 317 in 2019 (a 3.9-percent compound annual increase). They discovered an even greater increase in ray populations in South East Misool, from 210 to 511 individuals, a 10.7-percent compound annual increase. “Despite the global decline in oceanic sharks and rays because of overfishing over the past 50-years, the reef manta rays in Raja Ampat have been recovering and thriving,” Edy said in a statement highlighting the results.

Stephanie Venables, a senior scientist at the Florida-based Marine Megafauna Foundation, who was not involved in the study, said being able to scientifically demonstrate that mantas are increasing in areas with established MPAs is extremely important.

“Not only because it justifies having that protected area, but also because it’s a really good comparison for the threatened populations that are showing a decline,” she said. “Then it’s something to aim towards in other locations.”

Venables studies manta rays off Mozambique, where their populations are decreasing. She also co-managed the Marine Megafauna Foundation’s Raja Ampat program, though that work has been on hiatus since the COVID-19 pandemic.

Mother Nature — specifically, a strong El Niño event in 2015-16 that created favorable environmental conditions in the southern end of Raja Ampat  — likely played a key role in the population increase in South East Misool. During El Niño events, sea surface temperatures in the area are relatively cool and the top ocean layers are mixed by winds. These cool waters hold more nutrients, encouraging the growth of tiny marine plants, which, in turn, attract microorganisms called zooplankton that eat the plants. This turns South East Misool’s seas into a veritable buffet for reef mantas, which primarily feed on zooplankton, report Mongabay.

Edy and his colleagues observed a pregnancy boom among female reef mantas during and soon after the El Niño, which they hypothesize is due to the abundance of food during the event. Yet, they didn’t see many juvenile rays in the following year’s photographs.

This, too, can be explained by reef manta ecology. Most of the photos in Edy’s data set were taken at feeding and cleaning sites, the places on a reef where rays and other animals get parasites and dead skin cleared from their skin, gills and teeth by cleaner fish. Adult rays, large enough that they’re relatively safe from predation, frequent these areas. Young reef mantas occupy safer “nursery” sites in West Waigeo, areas near the Dampier Strait, and the Wayag Lagoon.

“In the past three years, we have identified more than 300-new manta rays. Not to mention the newborns and juveniles living in the Wayag Lagoon and Fam Islands nursery areas we discovered recently,” Edy said. Juvenile reef mantas stay at nursery sites for up to 28-months before joining the adults.

The research team attributes the increases in reef manta ray populations in South East Misool and Dampier Strait to the strong marine conservation and management policies Indonesia has set over the past 15-years. These include the establishment of Raja Ampat’s network of MPAs, the declaration of national protected status for manta rays, efforts to reduce fishing bycatch, and tourism regulation. Nearly all known sites in Raja Ampat where adult and juvenile manta rays congregate are within the MPA network, which is actively patrolled to ensure fisheries regulations are being followed.

“When people ask me, ‘Do you have examples of protected areas that are working, or nations that are doing a good job?’ I usually bring up Palau and also Raja Ampat,” Venables said. “The way that the MPAs were designed, it was well thought out and considered, and there was a lot of capacity built.”

These protected areas aren’t just good for reef and giant manta rays, but also extend to the thousands of corals, fish, mollusks, and other species that inhabit Raja Ampat’s highly diverse seascape.

The success story of these reef manta populations drives home not only the importance of solid marine and fisheries management, but also the value of long-term population monitoring and the dedication of the scientists, those like Venables and Edy, who collect data on these iconic animals day in and day out. Edy, who has studied manta rays for nearly 10-years, told Mongabay in an email, “Knowing that they are doing so well in Raja Ampat surely gives me personal satisfaction that I can contribute to protect this species, knowing that their populations are in decline in many places.”